Six weeks since our first brew was put into the fermenters seems like an age ago. It has been full steam ahead since July with Cheviot Brewery now, after over 3 years of planning and preparation, up and running and in full swing. With 4 different ales (soon to be 5) on cask, being sampled and enjoyed in ale houses from Northumberland to West Yorkshire, its been a busy first few weeks up at Slainsfield.

For our debut the folk at Barmoor Castle invited us to provide the bar for the opening of their new building Hedley Hall. Not only was it to be the first time our ale would be tasted by the public but we christened our pop-up bar and new pumps at the same time. With three ales on offer including an exclusive bitter, Barmoor Brew, we were hoping for a good response and some feedback on our first ales. Nearly 400 pints later… we realised that we had some good ales on our hands, and it wasn’t just our taste buds that thought so. 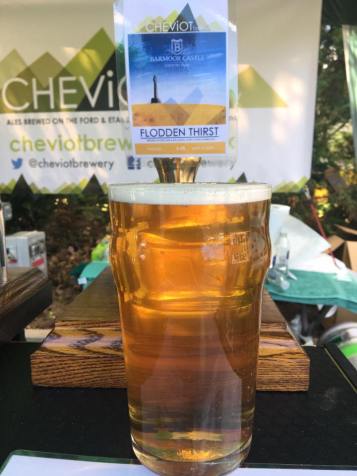 A pint of Flodden Thirst, and the Pop-Up Bar at Cheviot Brewery’s debut at Barmoor Castle.

We were extremely buoyed by the reception at Barmoor, and the fact that quite a few establishments were already knocking on the door to stock our first brews; so we got in the van and started delivering casks, and they went down well. Our local, the Black Bull in Etal sold out of their first cask of Cheviot Brewery ale, “Flodden Thirst” in 24 hours. The excellent Black Bull at Lowick had a similar experience, and a positive reception with drinkers in the Berwick pubs including the Curfew and Barrels Ale House meant that even more people were starting to talk about Cheviot Brewery, but more importantly, drink our ales.

Our opening trio of ales were:
Flodden Thirst, a light zesty and refreshing pale. Menhir a rich, dark coffee Stout , and an extra special 6% bitter, The Schil.

Within a couple of weeks we added a solid 3.8% copper bitter to the stable, Upland Ale, which has already gained a good following in town centre bars and country pubs alike.

Whilst these first 6 weeks have been exciting and pretty full on, we have managed to pop into a few hostelries and see how our ale is going down, and have been very pleased with the response. And with our second batch of Upland Ale about to go out, and a new pale following very soon behind, you may think that we would get a chance to catch our breath? However, with Berwick Beer and Food Festival and the Etal Show coming up next week… we’ve got some work to do.

We hope to see you there…

A couple of well received pints of Menhir in the Curfew, Berwick-upon-Tweed.